So this is going to be pretty biased. ;) I’m not sure if you get this feeling, but I know in advance that typing is going to win this battle. Probably. Who knows? Maybe by the time I’ve put down the pros and cons of each I’ll have changed my mind?

Typing. DAAAAAHHHHHH! I love typing. Did I say I love typing? (Like I said, this whole battle is very biased :P).

Typing is the equivalent of writing for lazy people. Once you’ve become accustomed, you’re hooked. That’s the thing about typing – it’s addictive. Addictive and easy to pick up.

I remember how slow when I was as a child. I don’t think it bothered me, which I’m glad about – imagine if I had been put off typing for good? But now I can touch type. I always hated putting my hands into certain positions to type, so I never learned to touch type – it just happened over time.

Another good thing about typing is the formatting, and the ability to do things over if you don’t like how you wrote something. I can type a word like this, this, , this or this. Tipex is useful,  but… I don’t know. Dare I say the delete key is better?

As well, as this, although you may be able to change the colour ink of a pen, and you may even have a rainbow pen (if there is such a thing?), just look at all the types of keyboard!

How cool is this keyboard?

But when, you think about it, there are a number of cons. The keyboard layout changes from country to country, to accommodate for extra accents and such… which can be confusing. It gets no harder to write in another language, but to type in another language is a different thing entirely. The same when trying to type a fraction, let alone a complicated maths equation onto a computer. That’s another thing. You also need a computer. When writing you don’t even need a pen, just imagination and a finger to write in the dirt.

As well as this… it’s very repetitive. I don’t normally find this a problem (I don’t find typing a bore), but when it comes to writing notes for exams or the like… I think if you write your notes it may stay stuck in your head more. Your hand has kinaesthetic memory, and you completely get rid of that in typing – so basically what I’m saying is you remember more of what you write than what you type.

And typing also brings with it the problems of machinery in general… viruses, complicated settings, and annoying quirks that are meant to make things easier but end up making things worse. Typing may be quicker, and more efficient… but you sure can’t go wrong with writing. 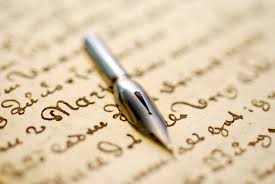 A classic calligraphy pen lid on a sheet of paper

Writing has a long and fruitful history. The pre-historic and historic times are separated by it’s invention… doesn’t that give you a sense of how old it is? And it retains a certain charm; to a certain extent, a handwritten letter is much more personal.

If banks handwrote their bills rather than leaving automated messages, I don’t think we would be in recession, because we’d all be so chuffed with how the bank takes the time to write to us and makes the bills more personal (You need to pay us £1000. By the way, how’s Marge getting on?) that we’d feel obliged to pay back.

(This is a total lie, and I doubt the bank and my family will ever become family friends, but I think you get my gist).

And of course, where typing is disadvantaged, writing excels. It’s versatile for everyone; you don’t need a computer; it’s far less repetitive… and yet it’s slow, tires out your hand and (this is nit-picking) it’s not as customizable. The real question is though the pen is mightier than the sword, is it more powerful than the keyboard?

Now I know you’re already expecting me to say typing. And… an hour ago, I would have said the same. And yet… I’ve felt myself warming towards typing. Normally I’m for the original (like when I pitted the paperback against the eBook and the paperback won), but typing was always an exception – wasn’t it?

I can’t believe I’m writing, no, typing this, but the winner of this Tech Battle is impossibly, unpredictably, writing.

P.S. I bet you didn’t see that one coming? I honestly didn’t plan the ending in advance. It just sort of happened. To be clear, I will still be typing for most things, primarily because of it’s speed and ability to edit things. But for writing my notes? Maybe I could even try writing a letter? Perhaps… yeah, I think I’ll give it a go.