Review of “Sound of Silver” by LCD Soundsystem

My drawing of James Murphy

Deciding which album was going to be the subject of my first music review took me a shamefully long amount of time. I knew the album had to be something I really liked, even loved, but not something I was too emotionally attached to; something I’ve listened to at least twice, but also not something I would tire of after another listen; not too well known to avoid future embarrassment (I don’t wanna look back and see that I gave Pet Sounds 7.5/10 *ahem*), but also monumental to me in some way.

Inevitably this gave me a bit of a headache, so I just scrolled through my list of albums on Spotify and picked what came naturally. Hence, Sound of Silver, an album by LCD Soundsystem release in 2007 (a very good year for music indeed).

LCD Soundsystem, if you haven’t heard of them, was a dance-rock band headed by James Murphy that released three very good albums before breaking up in 2010 (completely happily I might add, with a huge blowout concert to finish). I was reluctant to choose this album because I’m a little biased, LCD Soundsystem being one of my favourite bands of all time. But why not?

The drawing was meant to be done just while I was listening to the album, but I didn’t finish the beard in the time; by the time the album was finished, I just ended up obsessively retouching the lips. So I cheated a little bit and drew the beard while listening to ‘Dance Yrself Clean’ (the namesake of my last post). But it was worth it for the drawing. Source was this picture by the way.

But now, on with the review. 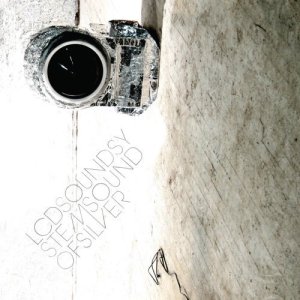 Sound of Silver was made in lonely basement parties with the lights turned low, with all the attendees crying on the dance floor. It’s not quite a heartbreaking confessional, but neither is it a fun but faceless dance record. Murphy always walks the fine line between the two, turning from misanthropic to raucous to deadpan to solemn blindingly fast.

Murphy lets his guard down, but sometimes not all the way; in ‘Someone Great’, as Murphy mourns the loss of a friend over a Kraftwerk-esque beat, his singing never falters, even as he complains that the weather is too lovely and the coffee isn’t bitter enough, as if he’s trying to pull it together one last time.

Undoubtedly the most emotional song on the album is ‘All My Friends’, where the indelible keyboard riff builds to a roar of triumphant melancholy, as Murphy, an elder statesman on a dance floor surrounded by twenty-somethings, laments being a middle-aged hipster holding onto his impeccable music taste for dear life.

In fact, many of the songs have the hazy, intoxicated ambiance of a club; in ‘Get Innocuous!’, the words are hesitant and sleepy in the hazy prelude to the morning after, the chirpy voice that follows him like the peppy, unsolicited advice of an acquaintance. ‘Us v Them’ shares similar themes, as Murphy rallies against those who want to spoil his fun before breaking down into despair. It’s often unclear if it’s the people around him who are ‘lonely and drunk’ or whether Murphy is projecting his own feelings onto them.

Despite its heavy subtext, the album is always witty and occasionally hilarious. Murphy screams and yelps through ‘North American Scum’, the goofiest song on the album, until he pleads “DON’T BLAME THE CANADIANS!” with a lack of inhibition more terrifying than I would care to admit. ‘Time to Get Away’ fits in lines such as ‘But me, I got a tiny tummy’ while still being delightfully misanthropic (not that they make much sense), and ‘Watch the Tapes’, if largely cryptic, is one of the most memorable songs on the album, with its back and forth opener getting stuck in your head even if you’re not entirely sure what it means.

The last two songs are both about love, but they go about it in very different ways. The New Order-like title track features the same five lines repeated in a monotone clip, with the music built up and then stripped back for maximum, as the fond memories of adolescent music-listening are balanced against the less fond memories of adolescent emotion-having. On the other hand, ‘New York, I Love You but You’re Bringing Me Down’, fashioned as an acoustic break-up song and sung sincerely, denounces modern New York, with a sigh of reluctance, as being as scrubbed up and soulless as it was once dirty but full of life.

Underneath the slick, insanely danceable music lies deeply personal songs about longing and loneliness, about nostalgia for the sounds and cities of your youth, and, most of all, about aging and all the baggage that comes with it. LCD Soundsystem have sung about these things before, as in ‘Losing My Edge’, but never in such a beautifully understated way. And all while being musically irresistible. What’s not to love?

P.S. I’ve decided not to rate albums as I’m generally reviewing ones I like so there wouldn’t be much variation on 9/10 and 10/10, and I don’t want to gush too much about how great I find an album. Also, I need to wean myself off critic scores, so it’s probably best just to leave them out. Thank you for reading! :) 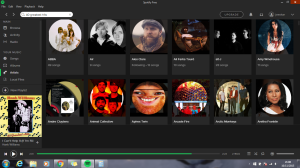 My Spotify artists page at the moment.

By now this blog has lost a lot of its readers and I’ve lost a lot of my enthusiasm for blogging. It’s been a little under nine months since my last post, which detailed my (what I then thought was huge but now I think is ridiculously tiny) Spotify music… collection? Is that the word?

I haven’t been completely inactive on WordPress since, but that was my last proper post anyway. Quite a bit has changed since then. The school year ended, I had a birthday (yay!), my laptop crashed (along with all my files as I hadn’t made a back up), my older sister went to uni, and somewhere along the line I became even more obsessed with music, to the point where I almost considered taking it as a GCSE.

I didn’t in the end, but I’m still listening to at least an album a day, so that doesn’t reflect my views on music – in fact, I decided five, six or seven months ago that I might become a music journalist, even if the pay is reportedly abysmal. My music taste has expanded a lot from primarily indie rock to everything but metal, and I don’t like all the same bands as I used to. A lot of the music I listen to now is derived from various music sites and lists (as opposed to my friends and siblings) which I’ve become unhealthily obsessed with reading. Not that that’s a bad thing per se – it all adds up to my musical knowledge. :P

I doubt I’ll do a follow up to my previous post with an updated list of my music because it would take way too long… but I would like to make this blog music-oriented. I would like to have a general update post every now and then, but I would mainly be reviewing music – mainly older albums I like, because those will be more enjoyable to review, but also new albums every now and then. I might even draw as I’m listening and upload the drawings too?

Obviously this is quite a change, and I don’t know if any of my old followers will enjoy my music posts, so maybe I’ll mix in some general posts. It’ll be good having something concrete to write about and keep me writing on schedule – I’ll try and write at least one post a week.

I don’t know if this will last, but it would probably be a good idea to try actually *reviewing* music rather than just listening to it before I decide to be a music journalist. Hopefully reviewing music will help me listen to it more deeply, develop my own opinions about music rather, and rejuvenate my writing and maybe my drawing as well. Anyhow, this should be a steep learning curve. The first few reviews will undoubtedly be meh, but have faith, I should improve… No promises though. :P